The RAC has re-opened under the current restrictions. Learn more on our Current Club Details webpage.

Here are the current restrictions on health clubs.

How Routines Improve Your Game

Have you ever watched one of Rafael Nadal’s tennis matches?

If so, you will likely have noticed the various antics that he performs throughout the contest. Between taking specific steps, to constantly touching his face before serving the ball or picking at his pants between every point, these routine behaviors are purposeful. While Nadal’s routines may be viewed as extreme, all great players have their own specific habits and practices when competing. Do you have any useful tennis routines?

It is important to determine what is within your control when playing a tennis match. Many aspects may be out of your hands. For example, a player cannot control the opponent’s line calls, the match weather or the court’s condition.

Yet, there are aspects of the game players can control. Being attentive to those aspects gives a player the ability to ignore distractions and stay focused. Game elements that can be controlled include effort level, sportsmanship demonstrated towards the opponent (and yourself) as well as whether or not a positive attitude is maintained.

The ability to focus on what is within your control and avoiding distractions is not easily accomplished. This type of thinking requires practice. When I was playing collegiate tennis, we reviewed this type of thinking on a daily basis. Once this skill is learned however, you will notice your ability to strategize will increase dramatically. This improvement is simply because you aren’t wasting emotional brainpower.

Routines are another way that we can feel the element of “control” during a match. It is one of the only physical actions that can influence the outcome. When asked about his routines, Nadal responded that performing these rituals gives him a sense of control during the match. He can always rely on these behaviors to help his composure as he prepares for the next point. Without these routines, Nadal is not in the best position to win the next point.

Next time you are playing a match, determine if you have any routines (some you might not even realize) during changeovers, between points or serves prior to the match. Don’t shy away from using these routines. Use them to lock into the present moment and a focused mindset; repetitive behaviors are only going to help! Some examples you might already use include the following:

My personal favorite is checking the strings and fixing them immediately after the point ends. It is a great ritual to forget about what happened in the previous point (good or bad) and prepare for the next one.

As a junior player, I was not aware of the power of routines. When I played at the collegiate level, I noticed that I could manage my emotions during matches with these behaviors. If I lost points that I thought that I should have won, I would look straight at my strings and start fixing them. It helped me to think more strategically instead of being mad for 10 seconds after the point ended. Any time that you spend being self-critical takes away from valuable time that is needed to win the next point.

I was coaching a player at Gustavus who was struggling with his tight match. Every lost point seemed to unnerve him and he was losing focus. Then during changeovers, his frustration boiled over to criticism of my coaching. I told him that I had been on “emotional management duty” with him for this entire match. There was no way that we could talk about strategy when he was that upset in between points and on changeovers. I told him that he needed to find a way to calm down after every point.

He decided he was going to try to stare straight at his strings. From that moment, the match play started to shift; he let go of his errors and missed opportunities routinely looking at his strings. This behavior provided the time to think about what was happening during the points and all the ways he could swing the percentages in his favor. Having this simple routine of looking at his strings changed the entire match for him.

While committing to match routines is not the only way to improve your game, it is one way to provide a sense of control within the match. Try one next time you are playing! You will probably feel more focused and “in-control” when you are in a tight match! 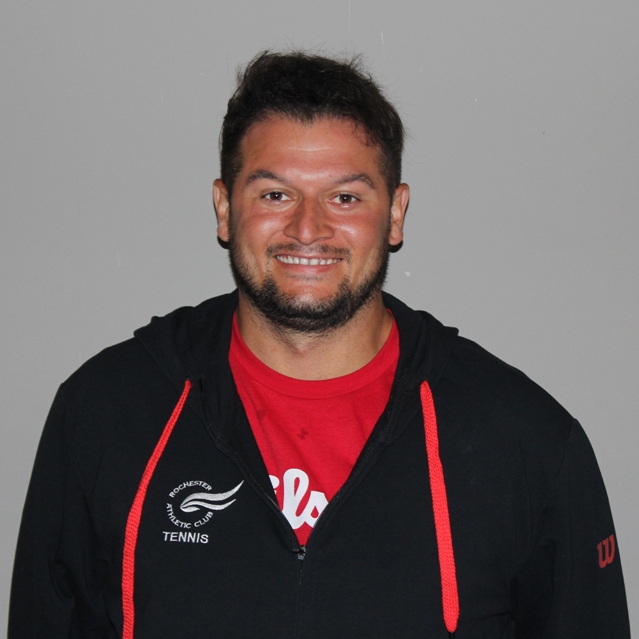 Tennis Professional Wyatt Lippert grew up in Cincinnati, Ohio and played tennis at The Ohio State University for four years. He also played futures and challengers for 3 more years. He then learned he loved the coaching aspect of the game and became an instructor in Ohio for four years until he moved to Rochester with his wife Madison. Wyatt enjoys coaching, billiards, golf, and meeting new people.

Our Current Capacity Is: